Reduction of Life and Safety Hazards

“Electrical failures can not only lead to costly business interruption, but are the leading cause of ignition sources for fire incidents. Proper installation and maintenance of this equipment is the key in preventing such incidents.” - Source: FM Global Risk Report 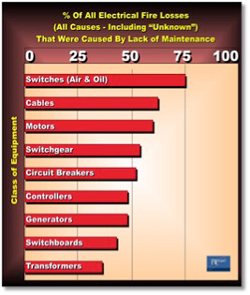 “Regular preventive maintenance is the best protection you can have against sudden and costly power outages.”- Source: Plant Services Magazine 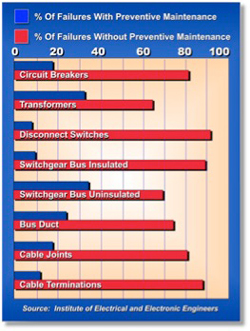 "Improperly torqued connections and bad contacts cause increased amperage draw and power loss as well as heating and arcing (which is both ineffective and dangerous).”- Source: National Energy Management Institute

“About one-third of all equipment losses are electrical in nature. About one-fourth of these losses are caused by loose connections. About eight electrical hot spots are detected per each IR survey. Of these, four are minor or intermediate in severity, and four are serious or critical. Each minor/intermediate problem detected results in an average potential savings of $500. For the serious and critical problems, this number is $3,000-$5,000. Based on savings averages of these eight hot spots, the total potential savings are $14,000-$22,000.” - Source: National Center for Energy Management and Building Technologies (Report NCEMBT-061102, prepared for the US Department of Energy) 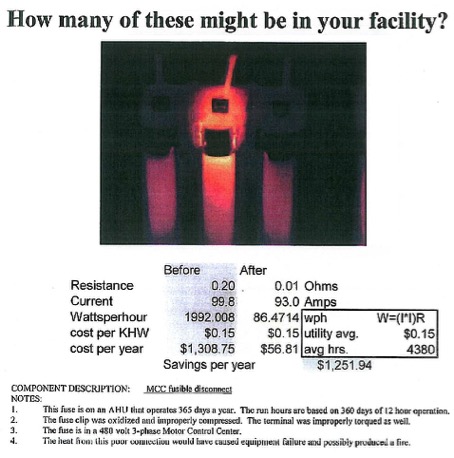 Reduction of Risk and Cost through Improved Power Quality

Overheating caused by harmonic current is a threat to safety because of its potential to cause fires.” - Source: NFPA Journal, National Fire Protection Agency

"Maintaining a high power factor in a facility will yield direct savings. In addition to reducing power factor penalties imposed by some utilities, there may be other economic factors that, when considered in whole, may lead to the addition of power factor correction capacitors that provide a justifiable return on investment. Other savings, such as decreased distribution losses, improved voltage reduction, and increased facility current carrying capacity, are less obvious." - Source: Construction Specifying Engineer Magazine

Electrical equipment; especially motors and their controllers; will not operate reliably on unbalanced voltages in a 3-phase system. Generally, the difference between the highest and the lowest voltages should not exceed 4% of the lowest voltage. Greater imbalances may cause overheating of components; especially motors; and intermittent shutdown of motor controllers. Motors operated on unbalanced voltages will overheat, and many overload relays can't sense the overheating. In addition, many solid-state motor controllers and inverters include components that are especially sensitive to voltage imbalances. - Source: Electrical Construction & Maintenance Magazine

Reliable, long-term operation of most electrical equipment requires a voltage imbalance of less than two percent; which means your system has too much imbalance. - Source: Electrical Construction & Maintenance Magazine

"Periodic maintenance on the switchboard includes cleaning, lubrication and exercising component parts. The interval between maintenance checks can vary depending upon the amount of usage and environmental conditions of each installation. The maximum recommended inspection interval is one year. This definition for periodic maintenance applies throughout this manual unless otherwise noted." - Source: Schneider Bulletin 80043-055-05

Many Insurance Companies and local jurisdictions require proactive electrical preventive maintenance. We can assist you in compliance!

Your electrical distribution system is valued at 10-15% of the facility construction cost.